By anyone’s standards, a significant length of time. Ten years ago today, my son Will was killed in an accident.

For those grieving the death of a child, time is a beguiling enemy. When the loss is fresh, time tantalizes you with the fact that your son was alive an hour ago, a day ago, a week ago. Irrational thoughts invade your mind. If I could go back, just a little bit, I could prevent this.  But time stands in the way, immovable, implacable.

Time passes. It taunts you differently now. It reminds you how long it’s been since you’ve seen him, spoken to him, dropped him off at school, kissed him goodnight. Mostly time taunts you with the fact that it has moved on without him. And as time moves, it brings new troubles.

If problems were doled out in equal measure to all, people who lose a child would be exempt from lesser ones. Health issues, conflicts at work, and traffic tickets would pass us by. But this is just as much fantasy as believing, even for a moment, that you could travel back in time and save your child. Problems still arise, even for mourners with less stamina to meet them.

Sing the praises of the Lord, you his faithful people; praise his holy name.

For his anger lasts only for a moment, but his favor lasts a lifetime;

Weeping may stay for the night, but rejoicing comes in the morning.

Loss is always present. Grief doesn’t go away. But God promises that it won’t last forever. Rejoicing comes in the morning.

3,650 mornings have come and gone since Will died. The morning that brings rejoicing may not come for a very long time. But after ten years of living with grief, I’ve come to view time differently.  I’m not ten years farther away from Will, I’m one day closer to seeing him again. 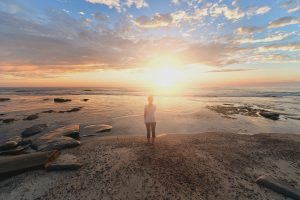